Many people we talk to are interested in experimenting with Kubernetes but find that putting together a development environment is daunting.

Since Kube Solo is based on xhyve there is no need to have VirtualBox and Vagrant installed on your Mac.

Kube Solo’s only external dependency is iTerm2. So make sure you download and install iTerm first.

On first launch, Kube Solo will prompt for configuration information then automatically download the appropriate CoreOS ISO image and bootstrap a Kubernetes cluster. After installation completes you will have a fully functional local Kubernetes environment. More information about what’s done during the install is available in the README.

From the status bar icon you can:

Here’s a screenshot of the menu: 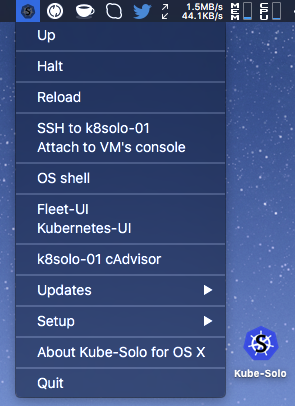 Now you’re set up, check out the official Kubernetes examples to get you started.

P.S. If you are in Barcelona on November 20th, join us at Distributed Matters Barcelona. I will be teaching an introductory class on CoreOS, Docker and the Deis PaaS. I’d love to see you there!